Georgia to Washington Freight shipping and trucking services are in high demand; Augusta to Tacoma is a very heavily traveled route.

The Augusta, GA to Tacoma, WA route is a 2,798 mile haul that takes more than 42 hours of driving to complete. Shipping from Georgia to Washington ranges from 2,332 miles and 34 hours from Marietta, GA to Spokane Valley, WA, and over 2,864 miles and a minimum of 42 hours on the road from Valdosta, GA to Seattle, WA. The shortest route from Georgia to Washington is along I-90 W; however, there’s also a more southerly route that uses the I-80 W, traveling through Casper, Wyoming and Lincoln, Nebraska. 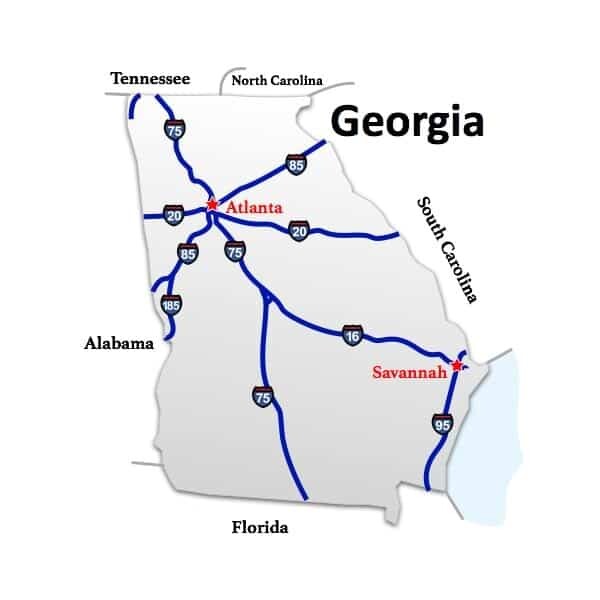 Washington State’s nickname, “The Evergreen State,” doesn’t do justice to the vast geography of this Pacific Northwestern state. Although lush rainforests do flourish in the central part of the state, glaciers, islands and fjords are part of the state’s Pacific Coast landscape, while the Cascade Mountain range is found in the drier, eastern area. Likewise, the rain that the Washington’s most populous city, Seattle, is known for is not typical of the whole state. A dry, semi-arid climate is found in the east, while the mountains are known for deep snows in the winter that make snow chains a November to April requirement for trucking and freight services operating in Washington State. Washington freight and shipping is concentrated in Seattle and along the coast, and Spokane is a smaller center for Washington freight and trucking.

Georgia to Washington Freight shipping quotes and trucking rates vary at times due to the individual states industry needs. Since both Georgia and Washington are mainly agricultural, with food processing, and food distribution centers, we see plenty of shipments by Less Than Truckload (LTL) carriers, as well as by the more common dry van trucks.  Our Flatbed carriers in both Georgia and Washington are also running a number of regular services between the two states, and it’s an active route for heavy haul freight shipments, as well