Virginia to Wyoming Freight shipping and trucking services are in high demand; Richmond to Casper is a very heavily traveled route.

The Richmond, VA to Casper, WY freight shipping lane is a 1,867 mile haul that takes more than 27 hours of driving to complete. Shipping from Virginia to Wyoming ranges from a minimum of 1,331 miles and over 20 hours on the road from Ewing, VA to Egbert, WY, to over 2,295 miles and a minimum driving time of 35 hours on the road from Virginia Beach, VA to Tower Junction, WY. The shortest route from Virginia to Wyoming is along the I-64 W; however, there’s also a more northerly route that uses the I-80 W, passing through Des Moines, IA instead of St Louis, MO. 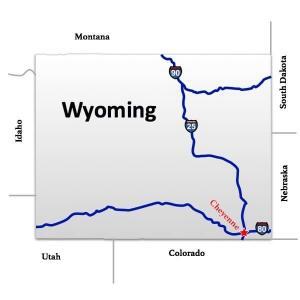 Wyoming is the 10th largest state in the US but surprisingly has the lowest population in the country. With the majority of the state being covered by the Rocky Mountains and the rest of the state is covered in a high elevation prairie also know as the High Plains. Since most of the states land is owned by the federal government, it houses two national recreation parks, Grand Teton, and Yellowstone park, along with wildlife refuges, fish hatcheries, historic sites as well as a couple national monuments and national forests.

Wyoming’s economy is mainly driven by mineral extraction, the majority being coal but oil and natural gas are also being extracted along with trona, which is mined in the United States as the main source of sodium carbonate. Tourism is also another contributor to the economy with the national parks, Yellowstone for instance spreads across to some of Wyoming’s neighboring states, which include Montana, Idaho, Utah, Colorado, South Dakota and Nebraska.