North Carolina to Virginia Freight shipping and trucking services are in high demand; Charlotte to Arlington is a very heavily traveled route.

The Charlotte, NC to Arlington, VA shipping lane is a 397 mile trip that takes more than 6 hours of driving to complete. Shipping from North Carolina to Virginia ranges from a minimum of 5 miles and just a few minutes on the road from Ennice, NC to Baywood, VA, to over 449 miles and a minimum of 7 hours on the road from Grissettown, NC to Lovettsville, VA. The shortest route from North Carolina to Virginia is along the I-85 N; however, there’s also a more westerly route that uses the I-77 N, passing through Harrisonburg, VA instead of Oxford, NC. 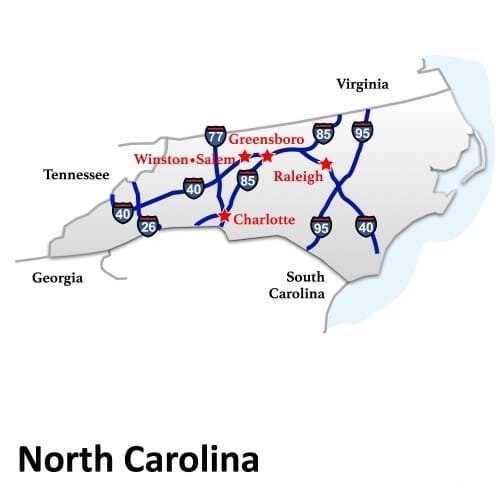 North Carolina to Virginia Freight shipping quotes and trucking rates vary at times due to the individual states industry needs. Since North Carolina is mainly agricultural, and Virginia is mostly industrial, with many food processing and distribution centers, we see plenty of shipments by refrigerated trailer. We also see a number of flatbed shipments as well as by the more common dry van trucks. Our Less Than Truckload (LTL) carriers in both North Carolina and Virginia are also running a number of regular services between the two states, and it’s an active route for heavy haul freight shipments, as well.