California to Michigan Freight shipping and trucking services are in high demand; Los Angeles to Detroit is a very heavily traveled route.

The Los Angeles to Detroit freight shipping lane is a 2,280 mile haul that takes more than 33 hours of driving to complete. Shipping from California to Michigan ranges from a minimum of 2246 miles and 33 hours from Sacramento, CA to Lansing, MI to over 2,342 miles and a minimum driving time of 34 hours on the road from San Diego, CA to Detroit, MI. The shortest route from Los Angeles to Detroit is along I-80 E through Denver; however, there’s also a more southern route that uses the I-40 E, passing through Oklahoma City, OK and Saint Louis, MO rather than Des Moines, IA. 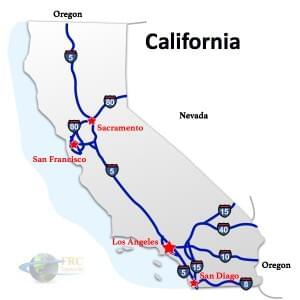 Michigan, the Great Lakes State, is made up of two peninsulas surrounded by the world’s largest freshwater lakes. Southeast Michigan, the most densely populated part of the state, is home to the Detroit Metro Area and the American automotive industry. Further north, there’s lumber, mining and furniture manufacturing. Michigan borders Ontario, Canada to the east and north, across lakes Huron and Superior. Indiana and Ohio are to the south, and Illinois and Wisconsin are to the west, across Lake Michigan. Detroit is approximately 300 miles east of Chicago and 250 miles west of Toronto, Canada. Michigan is warm and humid in the summer, cold and snowy in the winter. Michigan’s climate sometimes causes delays in trucking.

California to Michigan Freight shipping quotes and trucking rates vary at times due to the individual states industry needs. Since Michigan is mainly industrial and California is largely agricultural and industrial as well, with many food processing and distribution centers, we see plenty of shipments by refrigerated trailer, flatbed trailer as well as by the more common dry van trucks. Our Less Than Truckload (LTL) carriers in both Michigan and California are also running a number of regular services between the two states, and it’s an active route for heavy haul freight shipments, as well.